COBALT BLUE BOTTLES: WHO ARE YOU CALLING ‘OLD?’

Posted on March 15, 2016 by thedowneastdigger

The bottles in this grouping (left to right) held castor oil, citrate of magnesia, Peptenzyme and Bromo-Seltzer, all common medicines during the Depression

The most popular color collected by antique bottle collectors is cobalt blue. Maybe not so much for advanced collectors, but for the average person starting off and for home decorators wanting authentic vintage window accents, cobalt blue is the vivid color that leaps out at you and demands the eye’s attention.

As people chat casually about bottle colors, you’ll overhear some at flea markets and the like describe an old bottle as being not just cobalt blue, but “old cobalt.”

“Oh, that one more pricey because it’s the old cobalt blue,” you’ll hear them say. And this is just about as loose a term as you could ever imagine.

The dealer could be describing a glass Bromo-Seltzer bottle in cobalt from the 1950s or a rare piece from the 1850s, when the recipe for such a color glass was rarely used. The dealer may not be being intentionally deceitful, but if you’re going to spend some money on some gorgeous vivid blue bottles, as with any antique, it is wise to know what you’re buying.

Cobalt oxide, in various quantities, is the main ingredient that creates the vivid blue color seen in American-made bottles, predominantly in the mid 20th century. Three of the most common products sold in cobalt blue glass during that time were Milk of Magnesia, Vicks products and Bromo-Seltzer.

For someone who digs old bottle dumps, these bottles are found quite regularly and are generally kept, even though they are common, because they are good “traders” that can be sold to gift shops or decorators as long as they clean up nicely.

But for the digger, these types of bottles are set aside in the bucket while the digger tunnels deeper into the site for an older layer.

This is a bottle from a sole-proprietor druggist dating to around 1890. You would usually see a bottle like this in clear glass, but to find one in cobalt blue takes its value from $5 to about $85. 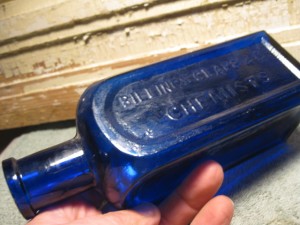 This is a larger medicine bottle from Boston, and it is quite rare. It would be considered “old cobalt,” dating to the 1870s with early crude-font lettering and thick glass with many beautiful flaws. This one is worth about $250.

Such later-era bottles, dating back to the turn of the century, are generally machine-made and are valued today at just a few dollars each. However the hand-blown or hand-finished bottles made in earlier decades range from being scarce to extremely rare and can sell for hundreds or even thousands of dollars for very unique pieces.

For example, while scuba diving for old bottles last fall, I found a giant one-gallon Harrison’s Columbian Ink bottle in aqua glass, which brought almost $1,000. If it had been in cobalt blue glass, it would have been one of only a couple known to exist and would have been worth much more, with the last one having sold at auction for $37,000.

To use the term “old cobalt” blue glass with some accuracy, I think you’d have to use the year 1880 as an approximate point where cobalt blue glass went from being “old” to “new.” I know that is a very loose description, but different glass producers during the 1880s began to improve and refine their recipes for producing glass, and what once was a rippled, seedy-textured, dark blue glass filled with tiny impurities started to become a brighter, smoother and much cleaner quality glass, such as the glass in a 1900s Bromo-Seltzer bottles.

These cobalt bottles contained poison, as noted by their quilted pattern and hobnails, making them easy to identify by candlelight to avoid tragic accidents. Depending on their size, poison bottles like this are valued between $50 and $500 or more for rare or larger sizes.

I dug this unlisted, rare ink bottle in Portsmouth, N.H., 30 years ago and have never seen another like it. Based on the purple hue of the cobalt glass, I believe it was blown at the Sandwich Glass Co. in Massachusetts. I won’t guess its value because I’d have a hard time letting someone buy it from me. Old cobalt glass, especially to antique bottle collectors, can be something you grip tightly!

I dug this unlisted, rare ink bottle in Portsmouth, N.H., 30 years ago and have never seen another like it. Based on the purple hue of the cobalt glass, I believe it was blown at the Sandwich Glass Co. in Massachusetts. I won’t guess its value because I’d have a hard time letting someone buy it from me. Old cobalt glass, especially to antique bottle collectors, can be something you grip tightly!

Little did glassmakers of the day realize that the inferior quality glass they had been producing would someday be so much more sought after!

The older glass, when held to the light, shows marks from the mold maker’s whittle or from temperature changes in the glass, as well as bits of silica, sand, potash, lime and other ingredients reduced and melted in the glassblower’s pot during those early glassblowing days. All of these imperfections are perfectly desirable to modern day collectors and lovers of colored antique bottles today.